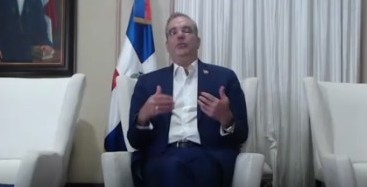 The President of the Republic, Luis Abinader, said this morning that the Republic of Haiti represents a monumental problem for the Dominican Republic and the region.

The president echoed the speech of Foreign Minister Roberto Álvarez, who before the United Nations Security Council said that there could be no Dominican solution to the crisis in Haiti.

In fact, the president emphasized the same words: “There can be no Dominican solution to the crisis in Haiti.”

Abinader said that the international community must send a strong message to rally the help that the neighboring country needs.

He said that the Dominican Republic is a good friend of Haiti and willing to collaborate in solidarity with the Republic of Haiti. Still, He insisted that any response must come from the entire international community to help the neighboring country out of the constant crises that affect it.

The president pointed out the possibility of exporting energy to Haiti, both from the northern border and from the southern border.

Regarding the United States, he said that they have a special relationship expressed in the fight against international crime, the fight against drugs, and the promotion of democracy. “The Dominican Republic cannot be the solution to the crisis in Haiti,” said the Dominican president this morning.

President Abinader participated this morning in a Washington Conference on The Americas discussion. President and Chief Executive Officer of The AES Corporation Andres Gluski led the conversation.

Dominicans relentless, a 5th day of protests over botched polls