Picking up from last week, I wish to reiterate: I am not, nor have I ever been a “cat person.” I have always enjoyed dogs as much or more than cats. I may have had a bit of a preference for dogs at some point in the past. It wasn’t that I liked dogs more: I just found them more suited to my lifestyle then. And there was the added plus that a dog could go for walks or hikes with you through the hills, ‘round lakes or wherever you chose to go. A dog has its advantages as a pet and companion.

Perhaps it’s age or the more in-depth appreciation of life and the things in it that sometimes comes with it if one is fortunate enough. At some point after arriving in the Dominican Republic – probably due to the absence of all the former distractions and the readjustment to the life tempo change that goes with island living I began to appreciate cats for their more challenging personalities and covertly unique characters. I began to see their enigmatic appeal, and the next thing I knew, they had won me over.

Although I had come to appreciate the pest control aspect of having cats around through our experience in the swamplands of Southwestern Louisiana, I still hadn’t seen a cat like Morris, our adopted Dominican cat.

Morris has always been a funny character with tons of personality which continues to develop in ever-entertaining ways. He began catching and eating flies somewhere before his first year. And that cat got good at it, snagging them out of the air with lightning fast swaths of his claws. Then he’d eat them. Sometimes he’d even manage to take down a mosquito or two. All of these pest-exterminating activities were and are much appreciated.

Thanks to our cat tribe our Dominican dwellings are as pest-free as our Louisiana camps were. The cats are also like watchdogs, noting and reacting to any strange sounds outside and alerting us.

Morris and Kitty are the most dog-like of our tribe. Kitty even follows you around if you call him. Morris will lay quietly and nicely on a chair, sofa or whatever may be near you as you work or read. He also looks directly into your eyes, and intently listens when you speak to him. He frequently answers. All the cats like to sleep down at the foot of our bed, but Morris will sleep right next to you under the covers, head resting on the pillow or his paws. After he’s gotten you to sleep, he quietly and conveniently leaves at some point in the night.

Sometimes he pops up and takes a spot along my side; then he nudges my arm with his paw for a pet or scratch – claws thoughtfully retracted. 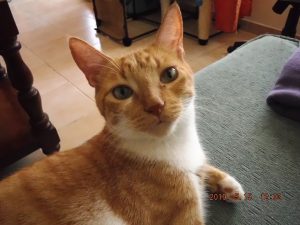 The amazingly ordinary-looking Dominican native Morris contemplating reality and the meaning of the moment with his extraordinary cat mind.

Though he may not travel outside of the house with me, when I return, Morris is as much company as any dog I have ever had. And again, the endlessly entertaining and ridiculous postures, expressions, habits, mannerisms, and antics of felines are well worth their weight in premium cat food.

We don’t need an alarm clock either: the cat tribe wakes us at 5:30-6 am most mornings.

Two Saturdays ago, we picked up another island cat. Melinda noticed the desperate cries of a kitten from somewhere within the venue we were playing. The staff had been feeding him some ham, but he was malnourished and dehydrated and too young to be so totally on his own. He was a tiny, ironically rat-sized cat. 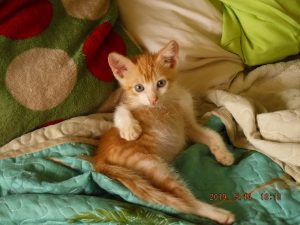 We named him Tiki in honor of his tiki bar origins, and he thrived on good food and fresh water. Morris took him under his wing and taught him the ropes. Tiki looks like a miniature clone of Morris. They play regularly and hang out. You cannot watch them for any length of time without laughing at least once at their hilarious capers and gymnastically agile romps. Tiki copies Morris and has become every bit as social and people-oriented as his big brother. 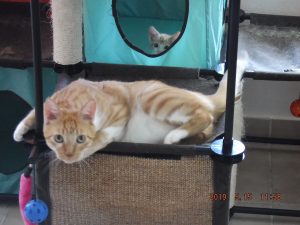 Few things in life look as comfortable and satisfied as a sleeping cat. Oddly or perhaps not, I have found myself inspired by my sleeping cats to appreciate a good sleep much more myself. And it is surprising how easy it is to fall into a good, deep sleep when laying next to a cozily sleeping, often purring cat or kitten.

Thanks to the peculiarities and unique qualities of a keenly minimalistic life slowed to the introspective and reflective tempos of the Dominican Republic, I have come to know cats in ways I may never have done otherwise. It has been an unexpectedly enlightening gift. In getting to know them, I got to know much more about myself as well. And the island itself directly provided two of the most irresistibly hilarious, entertaining, and intelligent cats who put me on the path to peace and tranquility. I’m not there yet, but it is in sight just beyond the horizon. 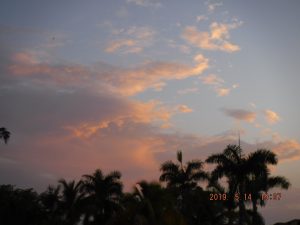 And, when people aren’t as kind, supportive or friendly as they could be I at least have a few very entertaining and loving feline friends to help me handle the rough edges, bumps, and bruises along the way.

I still like dogs and cats equally: dogs share a lot of similar qualities as cats. It’s just that I have a whole new appreciation for how intelligent, useful, calming, helpful, and healing cats can be.

I don’t know if I would honestly call myself a cat lover or a cat person. I can’t see myself hoarding or accumulating herds of cats anytime soon. One to four seems to be my limit. I’d call myself a definite cat enthusiast. And I would say I am the better for it. My heart is just that much warmer, thanks to a couple of Dominican cats.

Research suggests that if you love cats, chances are your personality may be one that is more “open to experiences.” That is, you are intellectually curious, prefer variety, and you have an active imagination. 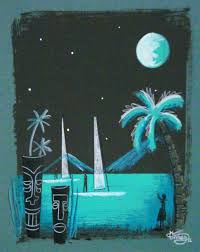 The mind boggles at the possibilities

Throughout history, cats have found devotees among prominent individuals, particularly among the creative and other misunderstood souls. Cats have a special connection with writers and intellectuals, the introspective lot. Sir Isaac Newton, Albert Einstein, Edwin Hubble, T.S. Elliot, Charles Dickens, William S. Burroughs, Jack Kerouac, Twain, Hemmingway, and Stephen King are all known to be cat lovers. King once wrote in a short story that “it might be that the biggest division in the world isn’t men and women but folks who like cats and folks who like dogs.”

Apparently: “Authors like cats because they are such quiet, lovable, wise creatures, and cats like authors for the same reasons.”

“When a man loves cats, I am his friend and comrade, without further introduction.”

Cats aside, the Dominican Republic offers ample opportunities for all manner of self-discovery and growth. Some opportunities and rewards are apparent. Learning a new language and culture can be healthy, stimulating, often gratifying efforts with multiple untold benefits. But some of the more stealthy dividends such as my recent discovery of the wonder and joy of cats are less obvious and the kind of thing which could easily get lost in the shuffle and pace of life somewhere else.

So keep your eyes, mind, heart, and soul open to all the island may have to offer you. If you slow down, still your thoughts, breathe and drink in the beauty in which the DR often surrounds you, you might find something you never even realized you have been missing in your life or awaken a part of yourself you never knew existed.

Growing Infrastructure and Transportation in the Dominican Republic